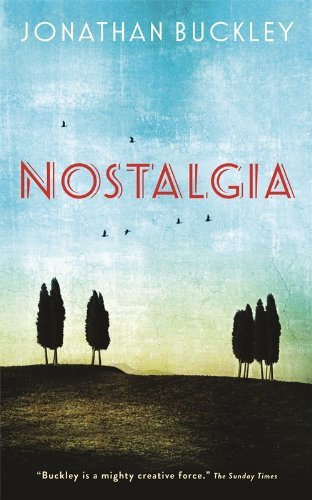 Sunday Times – Book of the Year
From a multitude of angles – history, geography, present and past residents, flora, fauna, festivals – a small Tuscan town is brought to teeming, vivid life. With a central storyline about an English expat painter, it’s as exhilarating as an Italian holiday.
Peter Kemp, Sunday Times, 24/11/13

“Buckley continues to write fiction as if it mattered . . . Nostalgia is his eighth novel, and is as strange, as nuanced and as peculiar as everything else he’s done, and certainly as good as anything by the dozen or so big brand names of contemporary Eng Lit.”
THE GUARDIAN

…a minor-key masterpiece of restraint, invention and the fine art of keeping expectations deliberately low, then elegantly surpassing them. […] a portrait of a place as complete as any far-flung cosmos in a science-fiction space opera, and of an intricate trio of characters as intimately knowable and unknowable as any in contemporary fiction. Frankly, if you are holidaying in Italy this summer, I’d pack this instead of, not as well as, your Rough Guide.
THE INDEPENDENT

“…works on the reader like a symphony: discursive yet ordered, its many strands held together by an intelligence that is broad in its sympathies and finely attuned to absurdity and pathos. Even an informative chapter on the Italian cypress takes on an emotional resonance in this context. . . “
THE TIMES LITERARY SUPPLEMENT

“Buckley’s novel is impressive for its meditation on art and its rich descriptions . . . The book is filled with plausible information – conjuring up the fictitious town, with its history and fauna, and Gideon’s career, with reviews and interviews – showing Buckley to be a quietly brilliant writer, almost eccentric in his craftsmanship.”
THE SUNDAY TIMES

“By its poignant conclusion, this affecting, inventive novel is enough to make you hunt down Buckley’s previous works if this is the first time you have come across him.”
THE SUNDAY HERALD.

But my book of the year is Jonathan Buckley’s breathtakingly clever novel, Nostalgia (Sort of Books). Set in a small Tuscan town it puts before us not only the expatriate protagonists but also the town itself, its history, its local residents and their life histories, all interspersed with scholarly digressions. Wonderful.
[Charles Boardman]

My favourite book of the year is Nostalgia by Jonathan Buckley (Sort of Books). It is impossible in a few words to do justice to the scope and depth of this multilayered novel, except to recommend it as warmly as possible. It is set in Castelluccio, a small town in Tuscany, the home of an ageing English painter, Gideon Westfall. Through many diffuse strands, which include documentation of Westfall’s work, Buckley paints a comprehensive picture of the town’s people, history, geography and mythology in a classic evocation of place.
[John Shields]